It’s Sunday (at the time I’m writing this) and I don’t know what to do with myself. I like to play tennis on Saturday and Sunday morning. Three weeks ago, during a match I was running around all willy nilly like Captain Carefree when, in a sudden change of direction move, I rolled my ankle.

You know that injury where your foot stops like it’s supposed to but your leg doesn’t get the memo so you end up standing on your ankle for about two tenths of a second before a lot of swearing ensues? That’s what I did. 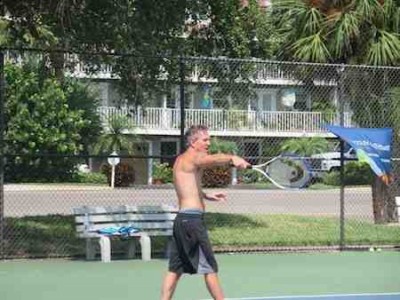 Aging? Yes. Champion of anything? No.

My daughter was here at the time so I sucked it up like a goddamned warrior, bought an ankle support wrap from Walgreens and hobbled my way through another two weeks’ worth of tennis by pretending that I was an aging champion and the cameras were on me. Aware of my stoic wince I hit harder that I normally do, doing what I had to do to win. This was what my millions of fans would expect.

The last weekend she was here we went to Fort Desoto which is one of the most beautiful places on this earth. I was walking along, lost in the shimmering, fine white sand, enchanted by the blue green water, enthralled by the lush greenery of the unsullied landscape and not at all staring at a hot babe in a string bikini when I broke my toe. 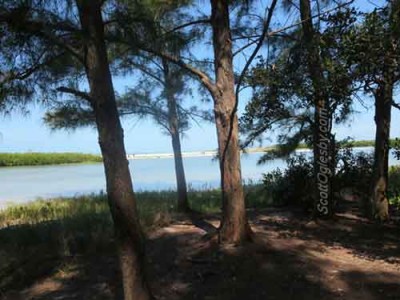 Broken toe not pictured. Also? A tree seems to have been infected with, well, me.

The parks and rec people (thanks a lot Leslie Knope) cut down a small tree and left the stump raised an inch above the sand. One second it’s all nature and boobs and the next it’s ripped off toenail, blood and a toe going from beige to blue to purple to black and me feeling a certain kinda way about the whole thing.

I spent the week hobbling around which only brought back and then exacerbated the other ankle issue. So now I’m just, like, totally fucking crippled and watching me walk is like watching a drunken zombie try to perform the Macarena only a lot less adorable.

That’s okay though, we can still go to the beach. I just have to get past seeing a black tip shark swim within five feet of me last month. Black tips are known for their aggressive behavior towards humans. That means they eat us. Every chance they get. They eat us like goddamned value meals on couch cushion flipping day. .

We went to the beach and Karen and my daughter swam while I kind of flailed about with wild-eyed panic looking for sharks and trying to stop my bad limbs from dropping off into the water.

When we got home I turned on the news and saw that a flesh eating bacteria had sprung up in the Gulf due to the unusually warm water temps. So thanks a lot to Al Gore for inventing global warming. They said that forty-one people have sickened and ten have been bacterialized to death.

Now Ebola is back, Russia is being a bully, China is earthquaking, Israel is bombing, Ohio’s water is also poisoned, California’s on fire, again, and Kanye West and Kardashian have gone to Ibiza to ruin it forever and I’m never going outside ever again.

So today my plan is to watch movies and drink coffee and nothing more. The End.

Be sure to look at Lost In Spain: A Collection of Humorous Essays by me.
The funniest book you’ve never read.

← After the Final Rose
The Internet Hurts My Brain →