Lost In Spain By Scott Oglesby

A Collection of Humorous Essays 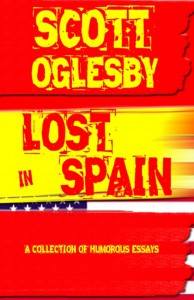 An awkward American alcoholic with OCD, a Welsh drug dealer and a murderous Gypsy walk into a bar owned by a British gangster in rural Spain…

It sounds like the start of a joke but it was only the beginning of my life in Spain.

This collection of humorous essays is loosely based on the three years I lived in the mountains of Spain.

It is packed full of cringe inducing hilarity that everyone who has ever had an awkward moment will relate to.

Half of the chapters are character driven; an insane examination of politics, drugs, bad boys, lost tourists, and aging drug lords.

The other half are more about the mess that is me, exploring the roots of my own dysfunction and battles with addiction, mental illness, and more issues than a child star on Dr. Phil.

In “See This Vein” drug addicts teach water aerobics, blow up a meth lab and destroy a luxury villa.

“Kappi and the Gypsies” features murder, mayhem, and marijuana but absolutely no soap.

In “1,2,3,4” I conquer crippling, lifelong OCD using nothing but a pen and my plucky wife.

A German Justin Timberlake look-alike takes his last ride in “Kaspar and Nothing More.”

In “Political Discourse,” an election is decided with beer.

Witty banter, comedic timing and a heart the size of a diseased cantaloupe “Lost in Spain” offers an insight into the human experience that readers will instantly recognize but never, ever, voice in polite company.

Lost In Spain: A Collection Of Humorous Essays is available at Amazon in paperback and kindle.

So far the book is reviewing well on Amazon. I would love for that to continue so if you’ve already read my book I would greatly appreciate you taking a few moments to pen a quick review as well.

10 comments for “Lost In Spain By Scott Oglesby”