Glad I Had My Towel

Lost In Spain made me cry ethereal tears of laughter, mainly because I can no longer cry real tears due to my lack of a body, which is just as well because I found the business of body-having a pain in the ass, which, I no longer have to bother wiping thanks to having found a higher plane.

After Scott Oglesby sufficiently changed to a version of himself that he fancied he left Spain. The Spanish were then titillated.

This “Collection of Humorous Essays” was as advertised, humorous. It also consisted of essays and that sounds much less like a good time than it actually is. So, perhaps, for the purpose of honest advertising I should instead say… this “Formidable Gaggle of Hilarious Musings”.. that sounds much better, doesn’t it? I give this “Formidable Gaggle of Hilarious Musings” a full three hundred billion out of a possible three hundred billion stars. I’m only counting the Milky Way because I have no idea what the rest of the universe would think, or if they’d be willing to give their stars away to a lowly human. 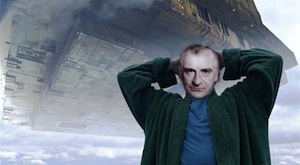 The Ghost of Douglas Adams.

← Common Interests With Glenn Beck
Write A Blog About This →

2 comments for “Lost in Spain Reviewed By Douglas Adams”