Puppy Is Afraid Of The Dark

My Spanish dog, The Puppy, is afraid of everything as I’ve explained in the last blog. Well, a new fear has sprung up like an oily and poisonous mushroom in the dark and fertile ground of her mind. Puppy is now afraid of the dark. To be precise, It’s not so much the dark as the sudden, explosive cancelling of the dark that lightning creates that she’s terrified of.

Anyway, a week ago at ten pm the sky went all shock and awe. Lightening hitting every couple seconds and thunder that shook the windows. The dogs and even the cat went PTSD quicker than you can say Pistorius. Nobody wanted to go outside and see a man about a horse and nobody wanted their belly scratched.

Finally around ten the storm let up and I took them out. Neither dog was too cheerful about their business but they attended to it like goddamned defecating champions.

At exactly 11:55pm I turned out the lights, not because I have OCD but because that is precisely the best time to turn out the lights every night. The dogs like that, they are used to that, and they know that if I were one minute too early or too late we would all die in some horrific fashion before 11:55pm the following night. A half hour later and I hear Puppy scratching at the door. I had just fallen asleep so this made me feel a bit Pistorious-y. 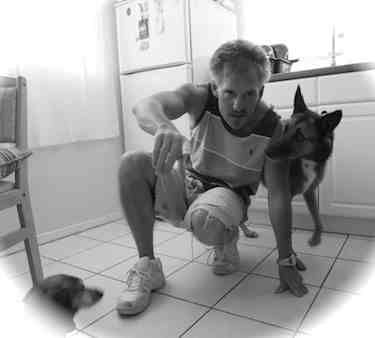 Not my best photo but it shows Puppy’s fear of…. dachshunds?

Still, I love the Puppy so I got up and let her out. I sat down on the sofa to wait for her to come back up and scratch the other side of the door. It’s our code, it’s unique and it’s ours alone.

Ten minutes passed and still no secret knock. I went onto the porch and could see her pacing back and forth in the yard. I called her and she looked at me like I was Pistorious. I had to go down and, basically, chase her back into the house.

I lie back down and start to drift off and hear another set of scratching code. I told her to “just lie down and go the fuck to sleep” but she doesn’t know who Samuel L. Jackson is and so didn’t get it. She kept scratching until I gave up. Wearing nothing but my boxer shorts and a scowl I put her leash on and walked her to the park a half a block away. I saw her pee, again, so that was DONE. There would be no more peeing so I brought her back up and went back to bed.

They do (I checked) but delivery takes three days and I needed it right away so that didn’t work.

I put a thin quilt in the door frame and shut the door so that it was hanging down the front.

I lay back down.

What. The. Ever. Loving. FUCK? I thought.

I got up, again, and turned on the lights, again. But I couldn’t see the dog. There was only the blanket covering the door and a fifty-pound bulge at the bottom with a tail sticking out. Scratch scratch scratch. 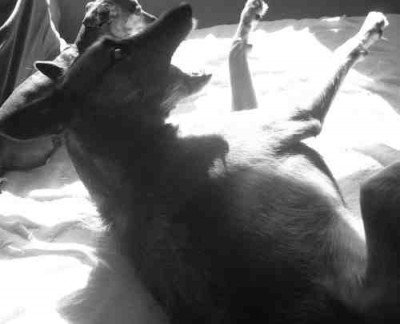 Can you hear the Psycho music? Can you, mother?

“No more code, we’re not doing that anymore,” I said to Puppy, who, once I directed her out of her blanket teepee, looked around the room with wild-eyed panic.

I looked at the digital clock on the TV box. 3:0-something it said. I wonder if this is like The Conjuring and the dog knows that this place is lousy with demons?  I thought.

In the end I kept the blanket up, moved the coffee table in front of the door and covered the ensemble with enough couch cushions and blankets and towels to stop a nuclear blast. I took a Clonopin and vowed to not get up unless a demon grabbed my ankle and pulled or hovered over me spitting into my mouth.

I managed to fall asleep in fits and bursts but I heard Puppy pacing around the house until four or five am.

She did it the next night and I immediately made my coffee table fort. She continued it for four more nights in a row until Karen came back.

The best I can figure it, either she was afraid of the silent flashes of lightening or the demons were afraid of Karen because it’s all over now. We still have our code, but it’s purely utilitarian now. The cuteness is gone.

Update: It’s not over after all. It’s been two weeks since Karen has been back and the Puppy is at it again. She’s finding clever new ways to get to the sweet scratch spot every night now. Last night she pulled away the pillows I’d stacked on top of the door-blocking table, climbed on top  of it like some kind of circus bear, and scratched at the window.

Read this Lost In Spain: A Collection of Humorous Essays by Me
The funniest book you’ve never read.

← Lost Without Karen Part 2
After the Final Rose →

14 comments for “Puppy Is Afraid Of The Dark”