Sunday is one of my seven fundays. Fun for me means a strictly regimented routine so that I always know what I’m supposed to be doing. On Sunday mornings (when I’m not working) we play tennis, Sunday afternoons are spent with football or movies and lots and lots of cooking, and Sunday evenings are for the Treasure Island Drum Circle. Sunday nights are strictly midgets and hookers and duct tape and dildos and Emeril Lagasse in a GIMP outfit but that’s a whole other post. The drum circle is the most unique thing we do with our week and that includes a large Italian man saying “BAM!” ten times in a row through a ball gag. 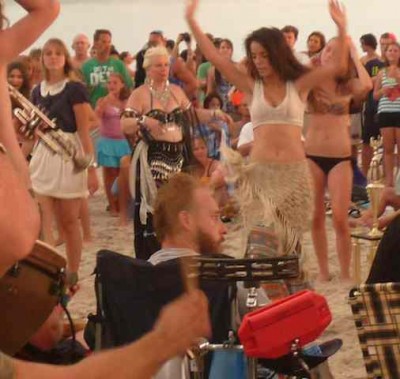 The T.I. Drum Circe was started in 2001 by two college students who became involved in belly dancing and decided to start a drum circle as part of a college project.  The experiment was to see how well local advertising worked. The first week they had six people. The fact that there were college age females belly dancing on the beach spread through word of mouth and binoculars and worked more efficiently than traditional advertising. The next week the crowd was in the dozens. Many of those dozens were also scantily clad, attractive females and so, within a month, there were between three and four hundred people showing up every Sunday.

It starts off with a dozen or so drummers gently beating their things.  More and more drummers show up and beat their things rhythmically and furiously and before you can say naked butt bongo people start dancing with abandon and absolutely zero inhibition. Other people show up with other things to stroke and pet and blow, until finally, the saxophonist shows up and the crowd is whipped into a mellow sort of ecstatic frenzy.

The circus-like atmosphere encourages circus-like performances and you get everything from hula-hoop girls, to acrobatic girls flipping around to some guy who likes to balance a gigantic stick on his forehead. I call him the balance-a-stick-on-my-head man. Almost everything is glow in the dark and/or flashing so once dusk hits it’s a tripper’s wet dream. Because, I’m sure, a tiny minority of the performers actually are tripping balls or rolling on ecstasy, you are treated to some truly spectacular people watching. 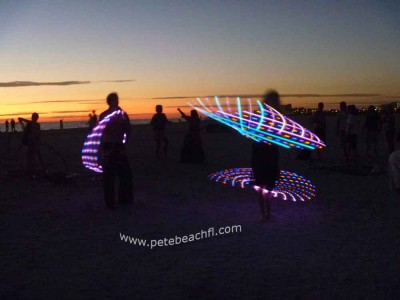 The obviousness that some people are into hallucinogenics and the faint and sometimes not-so-faint whiff of weed aside it is a very relaxed, peaceful and family friendly place. We’ve been going on and off for over seven years and I’ve never seen one fight. I’ve never even heard people arguing. They just bang on the drums all day.

Next week I’m taking Gimpy Emeril in his leather suit. I’m going to play his chap-less ass with two horsewhips until I’ve worked the crowd into a frenzy then I’m going to make off with the belly dancers and the balance man’s stick. All that would only happen in my mind because I could never wrangle that wood off of the balance-a-stick-on-my-head man.