Write A Blog About This

When people found out I had a blog five years ago they were full of suggestions about the sorts of things I should write about, things that had happened to them.

“I went to the mechanic and thought it was going to be, like, around $40 right? Then I get the bill and it’s almost $200. You should write a blog about when that happens!”

Or, “How about how bacon is the best thing that’s ever been invented? There is literally nothing that bacon would not taste good on, in a sandwich.”

Or, “Write how bad it sucks when you accidentally kill someone?”

Now, after they found out I wrote a book, it’s even worse.

“You should write a book about the Steelers and make the case that they’re not only the best team in football, but really the only team that has ever mattered”

Or, “Kids today are so stupid and mean because Obama. Write a book about that man. Instant best seller.”

Or, “I’d like to read about a vampire who’s really, really into sadomasochism and water-sports. Only the pee is, like, blood. Think you have the chops for that? ” – No, I don’t. And now after the vampire explosion of the 2K’s I hate vampires but I do still enjoy bondage as long as I’m not the one tied up but that’s a whole other blog.

I wish it were that simple I really do. I probably would have sold my soul and written about a fucking vampire if I had it in me because $Ka-Ching, amiright? But it’s not that simple. I can’t tell you how many times I’ve wanted to write a lengthy dissertation asserting my position of the fallacy that trickle-down economics is somehow beneficial to the poor. Actually I can. It was one time. I got a paragraph in and decided I needed more research.  I began reading up on Reagan who was the first vocal proponent of the theory when I remembered Nancy Reagan had once sat on Mr. T’s lap as the gold-encrusted Mohawk aficionado wore a Santa suit and that this was done in an effort to make people do FEWER drugs and then I remembered how terribly fucked the 80’s were and how much I miss that mostly innocent (for me at least) eclectic decade where music and TV and movies and fashion were simply abominable and still somehow awesome because it was hip to be square. 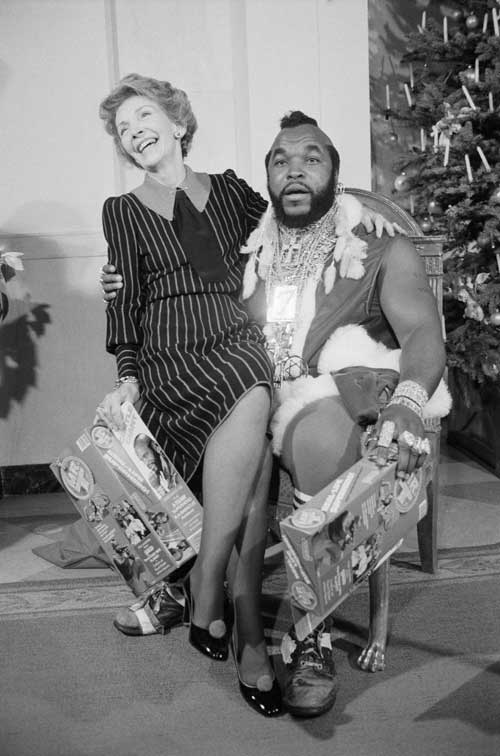 This is in black and white because the 80’s were a long, long time ago and we’re all going to die soon.

For some reason I always end up writing the crap that bubbles to the surface of my mind in a stream-of-consciousness burst of inanity because it feels like if I don’t those thoughts will become petrified within the furnace of my still intact but quietly burning soul.

I am capable, if I concentrate and don’t drink too much coffee, of organized thought and following a detailed outline to debate a salient point but it’s so much more fun to just let er’ rip and ride this roller coaster until we’re all dizzy.

And this is why I’ll never be Doris Kearns Goodwin.

Stayed tuned for my next blog, “Will Everyone Please Shut the Fuck Up About Bacon.”

7 comments for “Write A Blog About This”