Last week my wife left for two weeks in London. She said she was going to visit family but I suspect she secretly enrolled in Hogwarts or married a tennis pro at Wimbledon. Really, why else would anyone go to London? So she’s either going to come back as a wizardly witch or a rich bitch and I guess I’m okay with either just as long as she comes back.

It’s not that I’m the typical male, I’m not. I do most of the housewifey stuff because my schedule is easier and I’ve always done that stuff and I have very low testosterone levels, apparently. I’ve always done most of the grocery shopping and cooking and if I don’t run the vacuum every two days we will all die of dog fur and dust mite radiation.

When Karen’s gone there is no one to help with anything. We have one very demanding 13 year old dachshund.  Luke has to eat seven meals a day consisting of organic, plain, baked chicken breast, brown rice and two exact measures of wet and dry super expensive dog food I can only buy from the vet. If the measurements are wrong, or he adds or skips a meal, or he sneaks one, pea-sized bite of non-Luke-regulation food his stomach will, literally explode. I don’t know if  you’ve ever cleaned bits of dachshund off of a ceiling fan but I have not and I don’t want to. 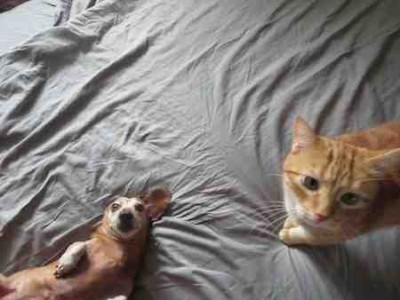 Looking all innocent but, I can assure you, that is not the case.

We also have a four year old Podenco that we rescued from under a broken down Peugeot in Spain. Puppy is afraid of everyfuckingthing. She’s afraid of the cat, afraid of Luke, afraid of my foot if I try to pet her with it, afraid of the air conditioner, afraid of trees, of wind, of leaves, rocks, storm drains, noise, lack of noise, bananas and couch cushions. It’s easier to list the things that the Puppy is NOT afraid of: tennis balls and other tennis balls.

My cat, Kitty Kat, is not afraid of anything. We also rescued him from Spain but he came from a lineage of feral cats and has grown fat as a house-cat. I try to keep him from eating all day every day but he has mastered the art of being annoying until you feed him. Piss him off with lack of food long enough and he will walk up to you and bite you, often. Not hard, just enough to say, “I’m going to eat whether you put my food out or not. Just go to sleep motherfucker and we’ll see what’s up.” 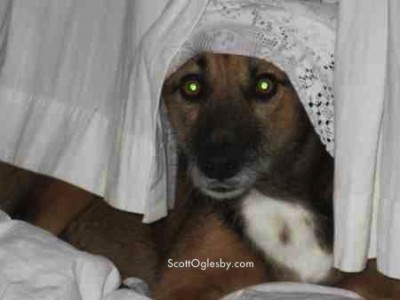 Somebody turned on a ceiling fan.

The other hour is spent watching Luke go to the bathroom. He can’t make it up or down the stairs to the yard by himself and if left alone, he will eat grass or his own shit or Puppy’s shit or lizards, which will make his stomach explode. He will also bark at everyfuckingthing that Puppy runs from out of fear. Which is everyfuckingthing.

To be continued next week…

14 comments for “Lost Without Karen”