We’re lucky to live on the beach. We even have a water view from our front door and balcony. We would have a full water view if not for the row of six condos that sit directly between our house and the water. If it sounds like I’m resentful of the strip mall McMansion mentality that caused condos to spring up like new relatives after hitting Mega Millions jackpot all over my beautiful beach, it’s because I’m resentful. Now I’m resentful of the condos AND that I’ve yet to hit the MM Jackpot so thanks a lot stupid metaphor. 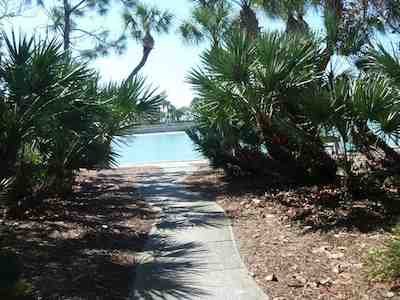 The view we would have, if not for the condos.

I woke up Monday morning at exactly 7:00 am to the sound of shotgun shells colliding with fireworks in a valley made out of tin and then shot through an amplifier at 10K watts. My dogs were furious and did what they always do when they’re filled with rage and hate and violence. They hid under the bed and yipped.  The dogs then got tired of barking and switched to howling and shaking like alcoholics who came out of a blackout in a dry town in Alaska during January without a coat.

I peeked out the door, getting ready to duck and roll, just like they taught us during the dark days of the Reagan years and although I didn’t see WWIII in the form of a giant blond Russian boxer doing hardcore steroids, I did see a large metal dumpster.

Ivan Drago must be shooting juice with Lance Armstrong in that thing, I thought because my first thoughts are always way off. 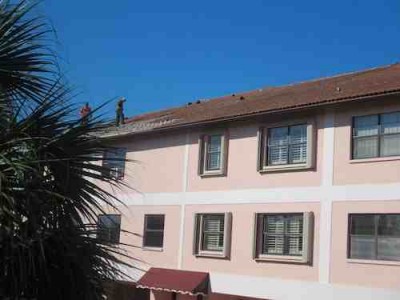 You can’t see how predatory they look. Or how loud it was. This picture needs a disclaimer that says, “Things In Picture are 1000 Times Worse Than They Appear!”

I look up to see three roofers on the condos’ roof looking like harbingers of the apocalypse. All sharp angles, wolfish, toothy grins and torn denim. They are ripping the old Spanish tile roof off and throwing the pieces fifty feet below to smash inside the metal dumpster at a success rate of 53% hit. The 47% missed shots result in the tiles smashing against the cement driveway and shooting shrapnel in every direction. These are not odds I like.

This is so much worse than Rocky IV, I thought but this time I was right because Rocky IV was only 91 minutes and this was sure to last at least tens of thousands of minutes.

Then the roofers took a break and one of them brought up one of those indestructible construction radios and turned it to AM talk radio which they left on for the rest of the day.

It’s a goddamned Christmas miracle I haven’t stabbed anyone (yet) this week. Also, does anyone know how to destroy an indestructible radio?

← Things I Miss About Spain
Apocalypse Not  →